When my roommate finally moved his stuff out, I was eager to begin moving new stuff in. From the much ignored room in the basement I grabbed my colorful scrap rug, my matching papasan chair and the big, bold, popart-esque motorcycle painting that had been sitting down there, un-hung, since we moved in. I left the TV and the Playstation (to serve as a DVD player), but moved out his queen sized bed to the newly vacated downstairs. I replaced it with the twin bed from Ikea that had been floating around various rooms in our house. A toddler bed was pulled out of someone’s storage closet and a little rug with roads and cars went down on top of the big rug. To top it all off I bought an $18 rocket ship tent - because every kids’ room needs something awesome! Considering that, for the most part, I was just throwing together already owned odds and ends, I think I made a pretty good room for two young boys. 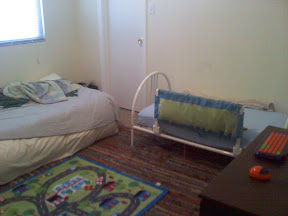 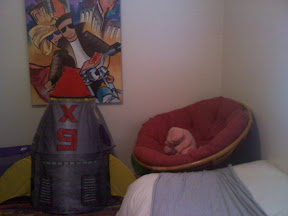 So why did I suddenly find myself building a nursery for a 4 year old and a 2 year old? I mean, children normally come into your life in predictable stages. You have 9ish months to build a baby nursery and then age it gradually as the child grows. But I never saw these kids as infants. They sprang fully formed into my life. And, after knowing them for a little less than a year, I figured it was time they had their own room in my house.

I am not their stepmother. And even though I am Daddy’s girlfriend, I am not even a potential stepmother. Daddy doesn’t live with me. He lives in a small town in rural Georgia with his loving wife and beautiful young boys. I live three hours away in Atlanta with my amazing husband and a strict budget that does not (yet!) allow for children. My boyfriend originally was coming to Atlanta every other weekend to play in our local LARP, but after we started dating he tended to find excuses to come up every weekend. It wasn’t just for me, though. Small town Georgia can easily drive a social person like my boy to psychotic levels of cabin fever. He wanted to get out, see his friends, be social and, of course, see me.

And that’s all totally understandable, but what about mom? Doesn’t she also deserve a social life? Friends and chatting and a chance to date? So she came out a few times, too. But if Mommy and Daddy are both coming to Atlanta, that means the kids are probably coming, as well. Now these are notably good looking, well behaved, intelligent children. Pretty much everyone in the social group took to them immediately. But as much as we may have liked having them around (me especially), it was clear that they didn’t quite fit. They crashed in whatever room was available (sharing the air mattress in the library, or bumping us from the master bedroom because it had a door that could be closed) and were constantly bombarded with “don’t play with that,” “don’t go in there,”and “what are you doing?” As much as they liked us, the fact that they didn’t have their own space clearly kept them from being fully comfortable - especially around bedtime.

As a result, Mommy tended to limit her trips to when she could find a relative to babysit, which wasn’t nearly as often as we might like. At this point, in addition to liking her as a person, I was also beginning to suspect that she and my husband were falling for each other and I really wanted to give that situation the time and space it needed to develop. Plus, I really liked those kids, and wanted to hang out with them almost as much as their parents. So when my roommate said he was moving out, I told him we’d miss him and all, but then immediately started planning how to redecorate his room. The results were everything I could have hoped for! The boys were super enthusiastic about the bed they could bounce on, the rocket ship they could play in (and dismantle) and the box of toys which were brought to permanently live at our house (which means that they now only get to be played with when they’re here). They now have their own beds to sleep in, a room to watch movies in, and a variety of options for entertainment.

All in all, I’d say it was a win-win for everyone. Daddy doesn’t have to feel bad about leaving his wife in rural Georgia while he goes to the city to play. Mommy has a place to come have a social life of her own. My husband has an awesome new girlfriend. The boys have yet another place to feel like they are included and loved. And me? I get a kids’ room in my house - screw what the budget says. 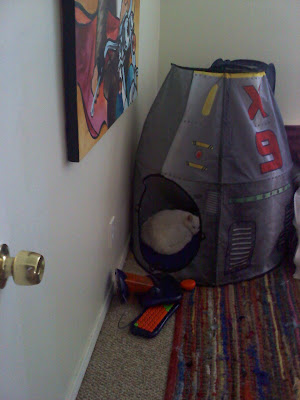