So I admit it, I was a little disappointed that I was never featured on Offbeat Bride. But ya know what? Who needs other people for validation? I have my own blog now, and I can fill out my profile myself! So here it is, in honor of my two year wedding (9 year together) anniversary, my Offbeat Bride Profile (the slideshow is to the right - I couldn't figure out a way to put it in the post itself):


The offbeat bride: Anie
Her offbeat partner: Lorien
Location & date of wedding: The Temple in Atlanta, Ga on August 17, 2008

What made our wedding offbeat: I actually thought of our wedding as pretty traditional. And the more I researched Jewish weddings, the more traditional it seemed. Turns out, a lot of my original “offbeat” ideas, like having both my parents escort me down the aisle and having the groom come down the aisle, are actually just the way it’s done in a Jewish wedding. However, despite how traditional I thought I was being, apparently there was enough quirkiness that we got lots of comments on how unusual and unique it was.

The bouquets were all made of clay and purchased off Etsy. I built the chuppah myself (with some help decorating the poles at the picnic the day before) out of my grandmother’s old table cloth. I also made my veil. We came down the aisle to the theme music from the Legend of Zelda. At the end of the ceremony, we bolted out the back while our bridal party receded to the victory music from Final Fantasy (can you think of a more appropriate time for victory music?). Our rabbi was super light hearted and had everyone smiling and laughing. At the (vegetarian!) reception we had a giant tiered cookie cake instead of a traditional wedding cake, and after about an hour or so of traditional dancing we broke out the DDR! We managed to get young and old(er) together to dance the Time Warp and then we were Rick Rolled! Oh, and somewhere in there we roasted marshmallows over a candle centerpiece in honor of a friend of ours.

Our biggest challenge: Getting people to show up. I know that sounds odd, but it’s true. A few close friends who I was hoping would come didn’t make it the priority I expected and had trips planned (and one apparently just forgot the day of) and my Uncle and Aunt both had work commitments they couldn’t escape. I told my mother that if I’d known earlier I could have changed the date, but she insisted that the date I had was important to me and my hubby and that in five years we’d still be celebrating on that date - and probably not thinking about who was or wasn’t there. Two years later, I realize she’s right. I remember my Aunt’s art on the shirts we wear to our anniversary parties (which also hung over the guest book), and I remember my uncle at the rehearsal dinner, and I don’t really remember who did or didn’t make it to the reception.

Tell us about your ceremony: We had a traditional Jewish ceremony - remixed. My rabbi, bless his heart, is an incredibly liberal, feminist, equal-rights-all-the-way kinda guy. Me? I’m a submissive housewife. And that’s submissive with an intentionally lower case s. The traditional Jewish wedding ceremony has the man essentially buying the wife by giving her the ring (it’s not a ring exchange so much as a ring granting). It’s actually based on the old testament laws for acquiring a slave. I really liked the idea of me being acquired by my husband, but I didn’t really want to explain my BDSM preferences to my rabbi. Instead I explained how I had “my moment” when I circled my husband seven times creating the sacred space for the wedding (a moment the man has no equivalent for) and I wanted the ring granting to be my husband’s moment. He kept harping on how the ceremony wasn’t equal since “my moment” had me silent and technically took place before the first blessing and thus the start of the ceremony, and I couldn’t quite bring myself to tell him that I WANTED a ceremony that represents a relationship dynamic in which I am the silent homemaker and my husband is the vocal provider of things-of-monetary-value and that I didn’t care if the whole ceremony created an unbalanced power dynamic shifted in my husband’s favor.

After a couple of sessions of arguing, we came to a compromise. We did the first part of the ceremony (the betrothal blessing/kiddushin) before going up to the chuppah. My rabbi said this is halachalically sound since originally these were two separate ceremonies, but we (as a people) haven’t done it this way since the 12th Century or so. Then, after the kiddushin, I circled Lorien and, when I was done, I gave him his ring while saying Ani L'Dodi V'Dodi Li
(I am my beloved’s and my beloved is mine). Because I gave him his ring then, and not during the kinyan portion, I believe that it did not counter his claim of ownership over me (though my rabbi is still free to believe it did). The rest of the ceremony proceeded in the traditional manner. Our rabbi chanted the 12 Wedding Blessings (with his beautiful voice) and our family members came up to read the translations. To add an “I do” moment for all the gentiles in the crowd (almost all of Lorien’s family, my paternal family, and almost all of our friends) our rabbi read us the text of our ketubah which we had signed in a private family and attendants only ceremony earlier and asked if we still agreed to it. (The traditional Jewish ceremony has no vows or “I do” moment - there is nothing binding in the main ceremony other than the ring exchange because the wedding contract/ketubah was already signed before the ceremony started).

My favorite moment: Wow, this question would probably have been a lot easier to answer two years ago! But I think it would have to be when the DDR screen came down. My husband and I had joked (or so he thought) about having DDR at the wedding as the only way to get him to dance. Little did he know that I had made arrangements with the building supervisor and one of our posse members to use the giant drop down screen that they used when broadcasting services into the reception room when there’s overflow on High Holidays. Groomsmen wrangled him until it was all set up, so he came in to the giant screen coming down with the dance pads out. His face lit up and he burst out laughing.

Of course, there was also when we were going to leave and someone said “Oh no, it's raining!” I looked at Lorien and he just smiled and shook his head with resignation. Months before I had made him promise that, if it were possible, he would dance with me in the rain on our wedding day. The weather was perfect in every possible way. It was bright and sunny during and after the ceremony so we could take all our formal pictures outside. And then, just as we were leaving, that brief downpour so I could have my moment with my husband. 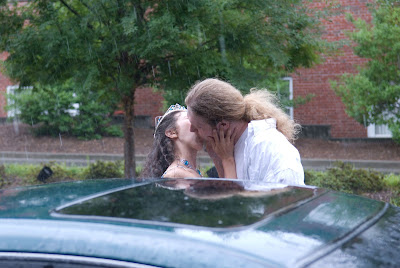 My funniest moment: The funniest moment during the ceremony would have to be when Lorien’s little sister messed up during the blessings. For the Seven Wedding Blessings we had seven family members stand on the stairs leading up to the bima to read the translations. The rabbi hadn’t been at the rehearsal so we hadn’t practiced with the chanting. The rabbi chanted the first blessing and Lorien’s Grandmother read the translation. Then, as soon as she was done, Lorien’s sister started reading her translation to the next blessing. She only got a few words out, however, before her father (standing behind her to read the next blessing) clapped his hand over her mouth. That was really the ice breaker moment when everyone realized it was okay to laugh and have fun.

My advice for offbeat brides: Don’t be afraid to stand your ground, but don’t waste time mourning ideas you can’t follow through on. I really wanted my bridesmaids in polka dot dresses, but I just couldn’t find ones that would work in time - so I made up for it with accessories and let it go. Also, if people challenging your crazy ideas and second guessing you is hampering your ability to enjoy your day - tell them! They are (probably) genuinely trying to make sure everything is perfect for you and if you tell them that they’re actually being the problem, chances are good they’ll stop. My mom is super amazing, but we did have a moment. When my sister dyed her hair purple before the wedding I was SO happy! She was going to look awesome! But then my mom started questioning if it was a good idea, if we should let it stay that way, how we’d feel about the pictures - and I just cut her off and told her that I had been super excited when I heard and now she was raining on my parade and I needed her to stop. After that, no more second guessing unless I specifically asked for feedback. She even helped talk the rabbi into letting me go down the aisle barefoot!